Keeping the faith and stopping myself getting bored is going to be a big thing for me on the pre-journey part.  I am very fickle, get bored ever so easily and am easily distracted by shiny things.  This is why I know we need to go in 2013 rather than any later.  I know my limits!

So this week has been pretty heavy on inspiration finding.  First off, a friend of mine (who never likes to think of herself as inspirational so I won't say she is as she'll just hate that) has a fab blog over at Wondering Wanderers and she blogged lots from last year when she upped sticks with her family and travelled around the UK in a 30 year old van.  They did lots of wwoofing as they were looking for an alternative lifestyle and wanted to get a taste for it.  They did and they are now off to live on Rum which is an island off the west coast of Scotland.  One part of their trip that I was very jealous about was 6 weeks wild camping round Scotland and I asked Nic if she would give some tips to anyone else planning on wildcamping with a campervan and her post is here.  I loved reading it all and it got me all excited to be doing it!

When I decided on our vague plan I came across another blog which I found incredibly inspirational.  Married with Luggage is the story of 2 people who decided life was too short and went for their dream of travelling the world (only slightly jealous of this!!!).  They sold everything they owned and saved, saved and saved some more to enable them to do 3 or 4 years of travel.  One of their tricks to keep them focussed is to have a map in a prominent position so you can always see what the dream is.  So one of the very first things I did was to get a map of the UK which also has Ireland and stuck it up in our living room. So here it is, I suspect it will one day also have cut out pics of places we want to go stuck round it. 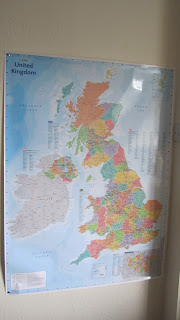 I've been to the library and picked up some Lonely Planet books - I love these and used to have loads of them when I was younger.  I just used to read and dream and read and dream and occasionally I did actually get on a plane and live it too ;)  Books with lots of pics in them, especially of the beaches in the Outer Hebrides are also good as are ferry timetables with prices in so I can crunch numbers to my heart's content! 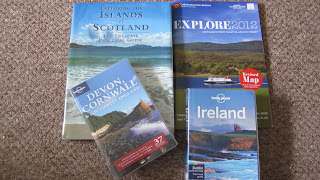 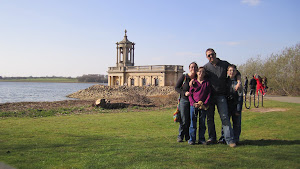 Promote your Page too

I am a participant in the Amazon Europe S.à r.l. Associates Programme, an affiliate advertising programme designed to provide a means for sites to earn advertising fees by advertising and linking to Amazon.co.uk